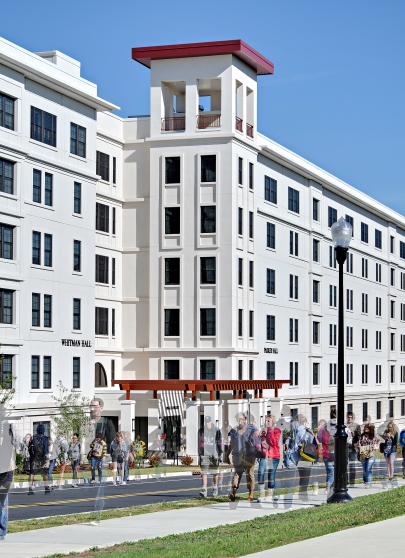 Now that move-in has come to an end and we have been able to get back into the normal flow of business, I have been rereading some of the old posts on here.

Seeing the pictures from all of the different sites, great interviews and, of course, the new freshman class that have just moved in reminds me that it is the beginning of a new wonderful year. Browsing through the site, I began to think about the name of the blog; studenthousingmatters.  I got to thinking about why some people would question living on campus and I came across an article debating the options of living on campus or commuting.  The following link will take you to that article:

For me, there is no question as to which option I would advise an incoming student questioning whether or not he or she should live on campus.

This will be my third year at COCM here at Montclair State University, a position I began after graduating from the same institution in 2011. For all four of my undergraduate years here at MSU, I was a resident on campus.  As a student, I took advantage of the fact that I was living on campus, and many fortunate opportunities that I encountered as a resident student have impacted where I am today. During my freshman year, I obtained a position on campus working for the Department of Residential Education & Services.  I was lucky enough to advance into the position of one of the student supervisory roles and lead the group of student workers I had been working with. This experience eventually presented me with the opportunity to apply to and eventually work at COCM upon my graduation.

While living and working on campus as a student, I was also able to meet some amazing people whom I never would have met had I not lived on campus. I met my fiancé while working for the office of Residential Education & Services, and if I had never become a part of that organization we may never have met. During my time as a resident student at Montclair State, I also played on various intermural sports teams with people whom I lived with and would not have known if we were not living in the same building. This experience strengthened many friendships which still exist today and also allowed me to meet people with interests similar to my own, leading me to make connections with additional people on campus. My time living on campus has influenced many aspects of my life in a positive manner, and I consider having chosen to be a resident student to be one of the best decisions I ever made. It is obvious to me how different my life would have been had I not spent the last six years living on the campus of Montclair State University, and for me, student housing definitely mattered.